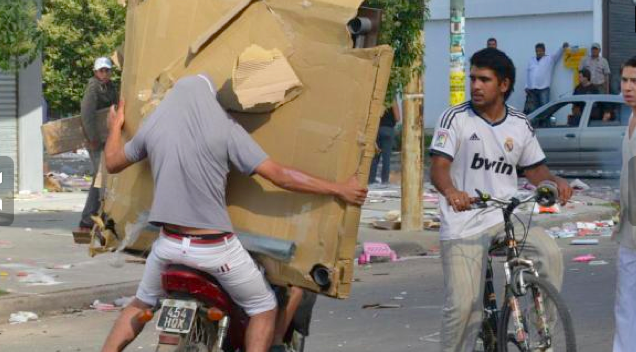 Yesterday evening the police department of Córdoba went on strike as they demanded higher salaries.

Since moving to Córdoba three months ago strikes and protests have been common occurrences. Different groups take to the main plaza in Nueva Córdoba to peacefully voice their frustration while blocking the busy intersection. And while these protests are a regular occurrence on this occasion the absence of police authority set off complete chaos as looters and thugs took full advantage. Also not helping matters was that Cordoba’s governor De La Sota was in Colombia attending a conference.

No police, no governor, no rules, no consequences.

The mobs chanted that they were hungry and fed up. But why rob a plasma TV, why rob a perfume, why rob computers? You can’t eat those things. Why exit a supermarket with only as many 40’s of beer as you can carry? This appears to be more the work of thugs acting under the cloak of anonymity that mob mentality provides.

The images play over and over on the news. Groups of 40-50 people rushing stores, breaking windows and leaving with as much stuff as they could carry.

If the situation wasn’t so sad, some of the images would be rather comical. A 40 year old lady sprinting out of a supermarket with nothing but a box full of bananas. An old fat shirtless man carrying an absurdly large rack of beef on his shoulder while sprinting as fast as his little legs will carry him.

Thankfully things were relatively calm in the area where I live – Nueva Córdoba. One saqueo (looting) did occur at a clothing store here however most of the other looting and chaos occurred in other less savory parts of the city. There was an eery calm outside my apartment as the plaza which normally sees very heavy foot traffic was empty. The large shopping mall visible from my balcony was chained up and all buses and taxis nowhere to be seen.

When all was said and done, some 75 stores were looted, 200 injured and 2 dead – a 20 year old struck by a bullet and an elderly man who died defending his store.

Order has been restored today as the police reached a deal and are now back on the streets. However the damage remains and this scar on Córdoba will need healing.