This past Saturday I took in my first futbol game during this current trip in Argentina. A superclassico – River Plate vs. Boca Juniors friendly match played here in Córdoba. River won 2-0 with both goals coming in the 1st half in the goal behind where we sat.

This post is a quick recap of the day along with a few thoughts of mine on Argentina soccer games and finally a story about my first superclassico that I went to.

My friends picked me up from my apartment, handed me a River jersey to wear and we headed out.

The day started at 3pm where we met at an old soccer field with an asador (BBQ). When I arrived we were a group of 8 but people kept arriving every half hour until we got up to about 20. My girlfriend had warned me to be very careful at the game however rolling in a group of 20 dudes that included 4 of tallest and 1 of the heaviest guys I’ve seen in Cordoba had me feeling pretty confident.

We prepared a typical Argentine dish called Pollo al Disco. Well I should say they prepared it…I just watched. Chicken, lots of different vegetables, olive oil, white wine, garlic, other spices all thrown into a huge disc which cooks over the fire. When the Pollo al Disco was ready we just placed the disc in the center of the table and attacked it with forks and bread pieces. It was delicious!

Like American sporting events there was some spirited pre-game drinking going on. The drink of choice being box wine over ice mixed with Pritty Limon (lemon soda drink). When the Pritty ran out we mixed the box wine with Coke. Needless to say I had a headache later that night.

The group was pretty excited to have a foreigner amongst the River fan base – Vamo’ River, que internacional! 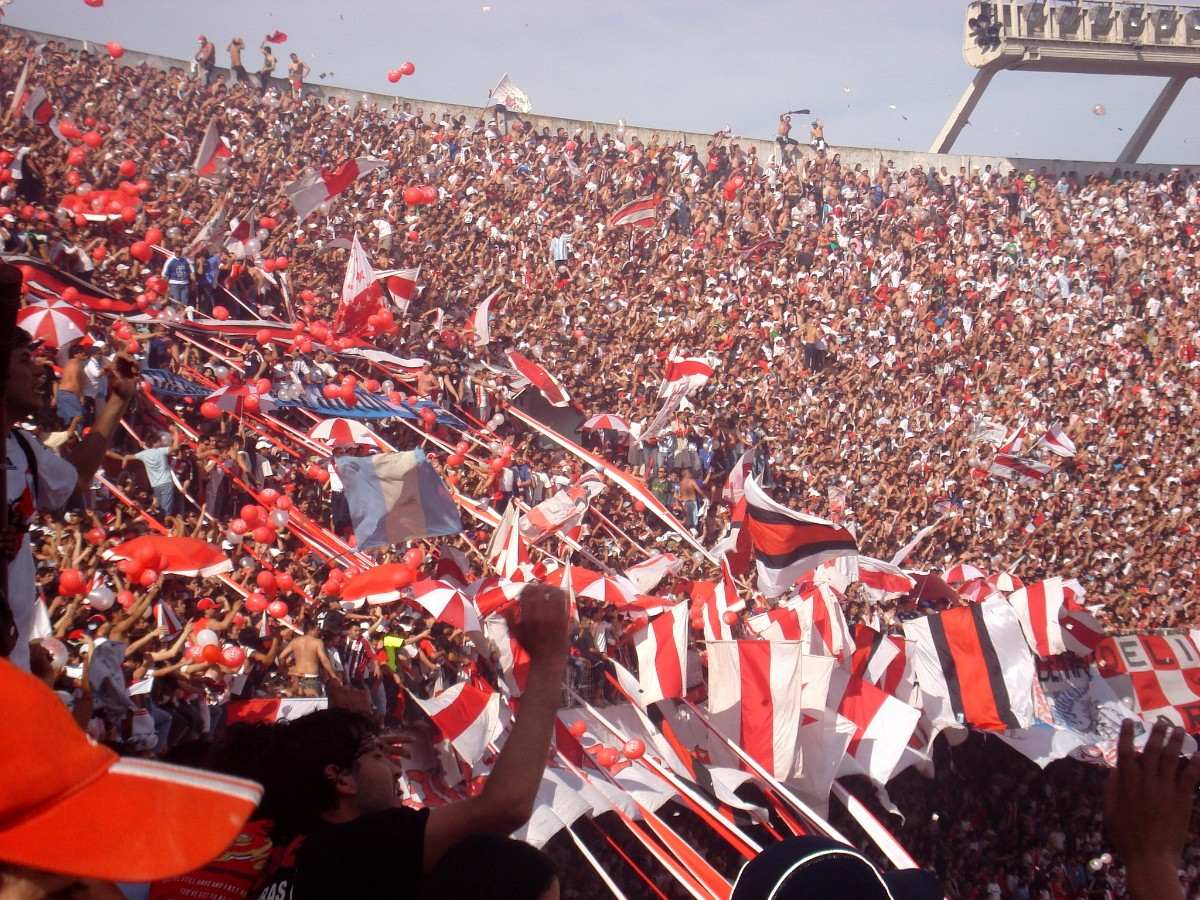 It’s no secret that Boca and River fans hate one another. The organization of the stadium ensures that the two sides are kept apart. As we arrived in the car I commented that it seems like there where only River fans at this game — Si solo River en este lado.

Everything is completely divided – Boca fans on one side the stadium and River on the other – parking, entrance, seats – everything separated. I never saw one Boca fan up close. Good way to avoid conflicts.

Singing the songs of your team doesn’t just start at the game, it’s a full day affair. It started at the BBQ and continued as we drove home.

I was a little shocked at the crudity of some of the songs given the kids in attendance. Here’s a sample lyric and translation from one song.

Either way the songs are energizing and definitely keep the crowd excited throughout the game. The enthusiasm of the songs would always increase when River made an excellent play or had a near goal. Then when River scored, complete choas with everyone jumping and singing at full strength.

The songs are incredibly simple. Most of them just a few lines and by half time, I was singing along.

We got into the stadium a good hour before game time to start the jumping and singing. We stayed an additional 30 minutes after the game ended to continue with said jumping and singing. Very different from most American sporting events where you’re lucky to arrive by game time (3rd inning if you’re a Dodger fan…boom) and then leave right as the game ends or even earlier if the score is lopsided.

They didn’t sell alcohol at the game which is a smart move given the level of intoxication that most fans enter with.

Story from the 1st Superclassico I attended

This was actually my second superclassico that I’ve seen live. In 2010 while traveling around South America I found myself in Argentina’s city of Mar Del Plata when the two teams faced off for a friendly match.

I had received thorough warning from the owners of the hostel that I was staying at to be on the look out for fake tickets. As I searched for a scalper a young lad placed a ticket into my hand. I studied it up and down. Scratching it with my finger, holding it up to the light, smelling it as if I knew the difference between the aromas of fake and real tickets.

The text was outstanding. The date matched today. The watermark and hologram provided me with further symbols of this ticket’s authenticity. I purchased it for $100 pesos confident that I had a secured my entry to the game.

As soon as I saw his face I knew I had a fake. The expression of the gatekeeper was one as if instead of handing him a valid ticket I had given him a shoe. Pure confusion.

At the time my Spanish was rough and I tried to talk my way in which wasn’t working. As thousands of other fans waited to get in the situation was a bit chaotic which eventually worked in my favor. I cut into the adjacent line to try my luck with the next ticket vendor. Same result.

I moved again to another line and this vendor was even more confused than the first two. Each time I held up the line explaining my story and negotiating to be let in the shouts of fans behind me became louder. Then I felt a tap on my shoulder.

A pair of Boca fans wanted to see my ticket. They told me what I already knew – this ticket was fake. But instead of just offering this fact they then handed me a real ticket. And just like that I was in.

Upon entering the Boca fans said – plata – indicating they wanted money for the ticket. I shrugged my shoulders to let them know I had spent all money on the fake ticket. They shrugged and went off not wanting to miss any of the action.

So I bought a fake ticket and was gifted a real one. But either way the end result was what I wanted – Boca vs. River.